When we use technology on animals it is to utilize the purpose of that animal to a greater extent that it was. This utilization plays a toll on the animals but it is for the benefit of humans that this happens. The dog for example is a creature designed for many things, hunting, companionship and even aides for the disabled. This ability in a lot of dogs is taught and trained in to dogs for the sake of human interaction. We teach dogs these things in order to better our lives without putting much focus on the natural behaviour of the dog. While there are restrictions on what breed of dogs do certain things, much like how smalls dogs aren’t usually out hunting other animals or Great Danes being used as seeing eye dogs; humans have picked and bred dogs in a manner to suit the needs for these dogs.

In a large amount of cases with dogs, when it comes to Dog Shows where trainers display their dog in a manner of a beauty pageant. There has been a lot of breeding for specific traits that people find ideal in a dog and want to keep that trait going through the generations. Over the past 100 years’ dogs have been intentionally altered to satisfy the needs of humans with little consideration for the animals. Pugs and Bulldogs for instance have been bred with a squashed face with little nasal room that causes difficulty breathing. Bulldogs have been bred to be bow legged as it was a desired trait. This breeding of dogs fulfils the purpose of the show dog lifestyle and also the demand for ideal traits in dogs that are desired by the rich and famous.

Dogs and many animals serve a purpose of companionship; to be a pet for an individual or a family. Technology has aided in this purpose by giving people the opportunity to live as long as they are capable of, despite the complications created from selective breeding. By introducing a market where people can get pet insurance on their animals for when injury strikes and they need special treatment from veterinarians. People with loving pets that have an excess amount of money want to make sure their pet gets the best treatment. When a dog gets sick and needs risky surgery there is a hefty price to pay for it. As more people, have gone through this experience there is market for veterinarians to have specialized skills and abilities with performing surgeries on animals that could at one stage could never have been performed.

Our interaction with animals is everywhere. A lot of our food comes from animals but not everyone knows how it gets to our plate from that animal; the process of how that animal gets treated on its journey to being killed. Cows provide us with an abundance of meat and milk based products. This is the cows purpose. Cows have been utilized for centuries as a technology has progressed so to the purpose of the cow. Cows have been bred for a separate purpose of either meat or milk. As each breed, has been treated in a different fashion to utilize its “natural” growth of meat or milk production. Holstein cows are raised to be milk production cows. Technology has impacted on the diet of the breed to boost milk production and consistency. Early research from Douglas and Rowlinson found that a happy and comfortable cow would produce more milk.

Continuing research found that by analysing each cow individually farmers can track every aspect of the cow and utilize that information to produce more milk. Afimilk tracks the behaviour of the cow to find out when it is in distress or is comfortable, tracks when the cow is in heat to allow the farmer to move the cow to the insemination field so the cow can get pregnant, tracks the weight of the cow to make sure that the cow is growing properly and can analyse the milk produced of the cow to make sure that there isn’t anything wrong with the cow and to make sure that the milk is appropriate for human consumption. With every technology that gets develop it can impact of the animals’ life. Artificial Insemination and Sexed Semen has been created to inseminate a cow with specific gendered semen without the need for a bull to get a cow pregnant.

Artificial Insemination has been a situation for both humans as it was a solution for couples or females who could not get pregnant in the natural fashion. Though considered unethical in many cases because it gives people the chance to be pregnant who naturally cannot it takes the power from natural progression to human capability. Though sexed semen is the ability to choose which gender you have your child whether you want a male or female it is still on ethical trial about being used in humans as gender preference can be considered sexual discrimination and warrant a change in natural balance of men and women over time. Luckily for cows however still considered unethical the impact it has increase the rate in which cows produce milk and utilize female calves. Hinde et al found that cows naturally produce more milk when they know they are giving birth to a female over a male. It is deemed that since cows live in a hierarchy society that if the cow cannot adequately produce enough milk to warrant the birth of a strong male then minimal milk will be produced. The best benefit for farmers was to make sure that cow would only breed female calves and so always have the best milk production rates possible.

The culmination of every technology impacted on cows brought down the natural rates in which a cow would naturally live its life. Holstein cows have a natural lifespan of around 20 years but the excessive increase of technology has brought that down to around 6 years. Technology gives people that chance to utilize the animals for as much as they are needed or as much as they are worth but gives no purpose in the animals’ welfare after the animals purpose has been done. Technology is a tool to better humans but to use on animals for the benefit of the human. To get the most out of the purpose of the animal. When we get food from an animal there is technology to grow the animal in the most effective and efficient way to produce as much meat as possible, where an animal is a companion there is technology to make sure the lifespan of that animal is as long as possible so humans can have them for as long as possible.

Technology as mentioned, is more ethically sound to be used on animals than it is on humans; with a large justification on it saying that the purpose of using animals is to benefit mankind. If humans cannot be used, though technology is being tested for humans then the next best thing are animals. While not every animal gets tested on to the same degree there is a significant way in which animals are bred for the purpose that they are needed for. Lab mice are one of the most common test subjects for scientists so they are bred with the natural intention to be used in the laboratory. While people are concerned about the treatment of animals it is the purpose of animals that drive what is being done to benefit society. Where we have organizations like People for the Ethical Treatment of Animals (P.E.T.A) rallying against the treatment of animals for any scientific discovery it is the purpose of those animals to follow through with what they are meant to do. The animals are bred for a purpose if they are suddenly released they could impact natural order.

Technology used on animals serves a purpose for the benefit of people. Technology used in any way succumbs to this notion that why use technology on animals if it serves no purpose to anyone else. Would it be a test of are we capable of creating something or doing something that we otherwise should not or do we just have the means to create something so we should see if we can?

We have animals that show high levels of intelligence much like the octopus that can get itself out screwed bottles; solve problems and even get out of its tank and move around to eat fish in a different tank and get back into theirs. Technology is being developed that aides in helping animals’ live their normal life – like a 3D printed foot for a duck. Thus, creating cyborg animals. It is only a matter of time before animals are having computers placed upon them, for them to be one with technology and develop the progression of how animals think and to challenge the true intellect of an animal. I wanted to follow the idea that technology used on animals goes beyond the purpose of the animal itself and so I created a Digital Artefact that sets out a future where technology has upgraded the intelligence and natural ability of an Octopus to where it has become one with technology; having the natural ability of an octopus, the upgrades of a computer and developing intelligence beyond that of a human and super computer.

Below is a written Let’s Play with a few pictures of the game I created “ATTACK OF THE CYBERPOD” as an expression of the future development of technology on animals. Here is information on the game.

ATTACK OF THE CYBERPOD

Bottle: Roll 3
Action Space “Upgrade at half the cost”
Nothing for upgrades 😦

The QUEEN has seen the door of DEATH! 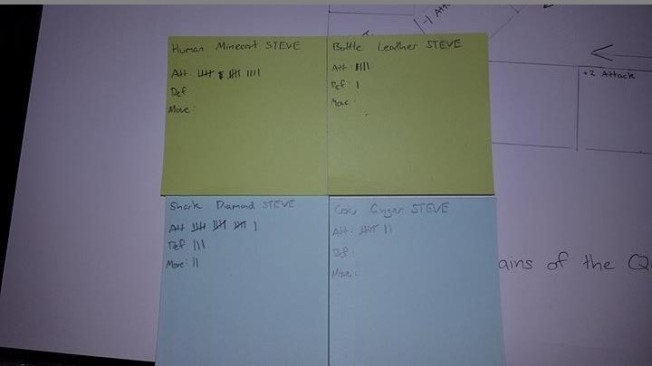 The Stats going into the second phase

Players are going to face their greatest threat in order to reach salvation!

Human Octopus: Roll 6
[Double Attack for Next Fight Only) 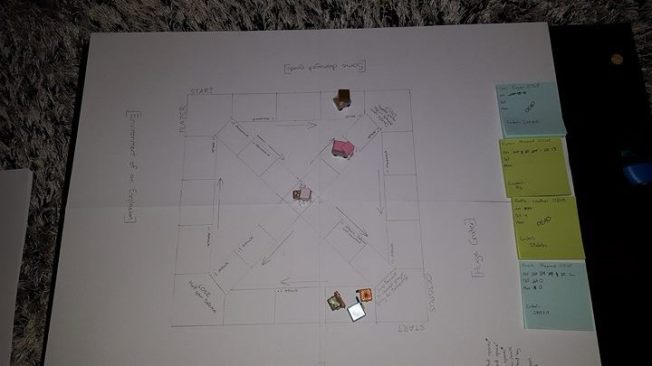